Though it’s admittedly been a while since I have focused on much else here, I do have interests outside of Pullip those interests include comic book stuff especially if it’s related to Joker and/or Harley Quinn. Yesterday a very large order arrived from Bigbadtoystore, I decided to feature one of the items that I was most excited about here today a new Joker & Harley Quinn statue. 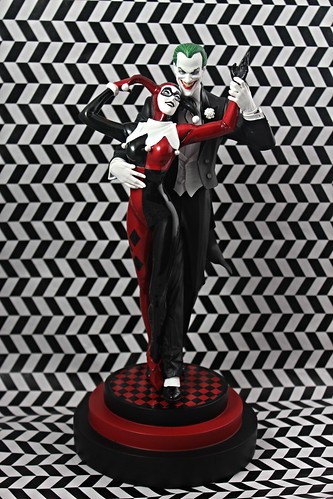 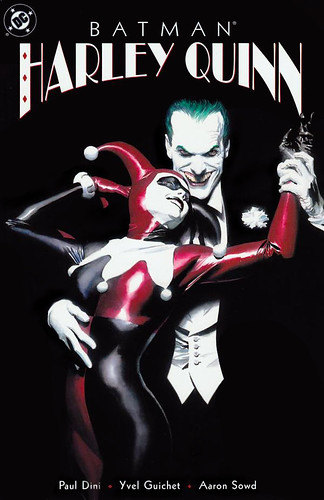 The cover is quite popular and has been available on a variety of merchandise over the years including t-shirts (which I unintentionally happen to be wearing at the moment) and cell phone cases (which I have on my phone) but never before as a figure/statue.  As soon as the figure was announced by DC Collectibles I was elated and immediately preordered it through Bigbadtoystore. The statue is approximately 1/6 scale (slightly over a foot tall) and has a MSRP of $249.99, I paid $199.99 via BBTS.
END_OF_DOCUMENT_TOKEN_TO_BE_REPLACED

I figured it was just about time for an interlude or a moment of respite where I do not focus on dolls here as I couldn’t remember the last time I wrote about something other than a Pullip here. Revolutionary Girl Utena is one of my favorite older anime series, I consider it to be almost criminal that there was barely ever any merchandise from it during it’s original run. It’s still kind of feels funny to me to think of Utena as an older anime series now, I still remember eagerly waiting for the fansub tapes to arrive at my local comic book store. Last year a glorious 1/3 Azone doll of Utena was released, I was kind of halfheartedly browsing Yahoo Japan recently searching for her when I spotted this lovely figure by Sega Prize. 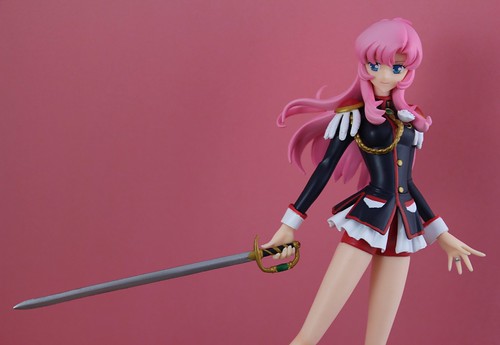 The Utena figure was released late May, it’s a Sega Prize so it has a MSRP of a mere 1800 yen. There is another figure of Utena this time by Megahouse forthcoming (details here), I was initially very excited about it as it was Utena but something about it made me hold off on preordering her. I think I will wait for owner photos to make a decision about her especially since I am very satisfied with the Sega Prize.
END_OF_DOCUMENT_TOKEN_TO_BE_REPLACED

I went to go see the Lego Movie a couple of weeks ago, I really enjoyed it so much so that I decided to buy a Lego Movie kit specifically the Cuckoo Palace. Unfortunately at least in my area it seems as though everyone had the same thought as me and wanted the Cuckoo Palace as no local stores had it in stock. During my great hunt, I found something even better than the super cute Cuckoo Palace… a new Batman Lego Kit!

I love Batman lego kits so of course it had to come home with me! The new kit I found is the Batman: Joker Steam Roller Lego kit, it has a MSRP of $49.99 and it is one of four new kits released to coincide with the release of the Lego movie (Batman doesn’t appear in any of the official Lego Movie kits released so far).  The Steam Roller kit is the largest of the four new kits, the others are Batman: Penguin Face Off MSRP $12.99, Man-Bat Attack MSRP $19.99 and Batman: The Riddler Chase MSRP $29.99. I have since purchased the Riddler kit coincidentally alongside the Cuckoo Palace as there was a buy one, get one half off Lego sale at ToysRus’s website and they happened to have them both in stock at the time ^^; I’ll more than likely get the other two kits at some point as well, I have all but one of the newer series of Batman kits (I don’t have the Dark Knight Rises-esque Bane kit) as well as some of the kits from the first round like Joker’s Ice Cream Surprise.
END_OF_DOCUMENT_TOKEN_TO_BE_REPLACED

It’s not all about dolls here though lately it may seem that way. I felt like photographing something not doll related for once unfortunately I’m still far from home so my choices were kind of limited, fortunately I bought the Takatsuki Ichika nendoroid for Mr. Klein for Christmas and she still happened to be here.

Ichika is from the anime Ano Natsu de Matteru. The anime aired in early 2012 and has since been licensed for distribution here in the states by  Sentai Filmworks and has since been released under the title Waiting in the Summer. I admittedly haven’t watched much of the anime series myself but it is one of Mr. Klein’s newer favorite shows as it reminds him so much of his favorite anime Onegai Teacher!.

I just love Ichika’s facial expressions, this dismayed one is by far my favorite. 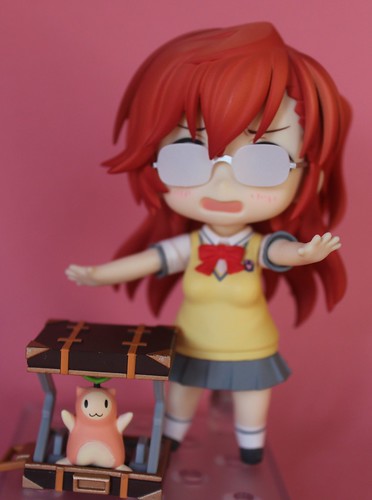 Ichika with her cute little puppet of herself and Kaito, it is worth noting that though there was never a nendoroid of Kaito to go with Ichika there is a nendoroid release of her friend Kanna. 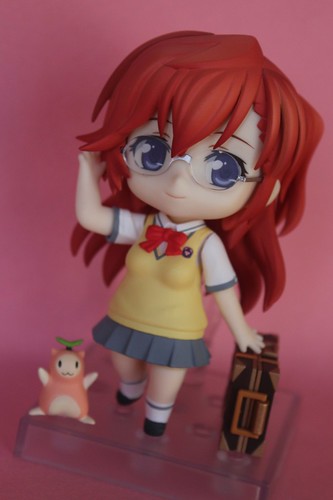 I love Madoka so of course, I could not resist buying a new version of the nendoroid when it came out. The Maiko version of the Madoka nendoroid was a Good Smile Company exclusive, available via their online shop or at their booth at various conventions (Anime Expo, NYCC, Japan Expo and CCG Expo). She was first released in July and with a MSRP of 3800 yen.

I’ve actually had mine since late August and had been meaning to share pictures of her here ever since but I keep getting sidetracked every time I came here to post about her I ended up posting about dolls instead ^^; .  It’s a pity I kept on getting a bit sidetracked as she is easily one of my favorite nendoroids.

The colors of her kimono don’t really seem like they would go together, but they actually balance out rather nicely. I absolutely love her hair accessories and her cheerful expression.

Couple of additional pictures of her in my Madoka set in flickr.

Recently we re-watched Sword Art Online, I had been wanting to for a while but had been resisting for fear that I would cave in and finally hunt down the Asuna Dollfie Dream.  I really like the show a lot, it’s probably one of my favorite newer shows besides Madoka. Shockingly I didn’t have any figures/toys from it until somewhat recently, of course that had to be remedied.

My first Sword Art Online figure purchase was actually the Asuna figma which I still haven’t busted out for photos yet (I have a ridiculous stack of figmas/nendoroids that I haven’t deboxed/played with yet ^^;).  While I was hunting for the Asuna nendoroid (which I finally did find two days ago) I came across this lovely figure of Asuna by Kotobukiya.

This  Asuna figure was released in late May of this year, she is 1/8 scale and had a MSRP of 7800 yen. I actually bought mine at BigBadToyStore of all places, it’s still readily available at a lot of stores but I happened to have a pile of loot already amassed at BBTS that I was planning on having shipped anyway so, I figured why not toss her in the order too.
END_OF_DOCUMENT_TOKEN_TO_BE_REPLACED

It occurred to me that I had this pair for a little while now but I never shared any pictures of them. Madoka and Homura are from the series Puella Magi Madoka Magica, the figures are part of the Beach Queen line by Wave. The figures are approximately 1/10 scale and have a msrp of ¥3800 each.

This post serves a dual purpose, I wanted to post about my somewhat newly acquired Homura and Madoka beach queen figures and I wanted to put up a little blurb about how I will be on vacation next week! What better way to say I am going on vacation than a couple of cute girls in bikinis, eh?

I’m off to Disney World next week, I’ll have my laptop with me but chances are it’ll be radio silence from me next week. It’s entirely possibly that I’ll start catching up on my backlogged posts (more Madoka figures/new pullips announced/Sentimental Noon review) tomorrow. I’ll be stuck home all day obsessing like a drug fiend, frantically checking and rechecking tracking numbers to see if my Pukifee Vanilla and/or Dollfie Dream Sister Mayu will arrive before I leave for Disney instead of being held in postal limbo until my return…. so I may as well get something done, right?