After not buying many figures based on comic book characters other than Funko Pops for a while, I recently went on a bit of a buying splurge buying several Harley Quinn figures as well as other comics/comics related figures etc that had been on my neglected wishlist for too long. I had been wanting the New 52 version of the DC Comics Bishoujo Harley Quinn figure in particular for a while now, she had caught my interest as soon as she was announced and I even had her preordered at one point until I canceled her in favor of something else (I honestly can’t even remember what anymore) figuring that I would pick her up after release. Her release came and went, I kept on waffling about whether or not to purchase her then I saw her at my local comic book shop and I knew I had to have her eventually.

I started looking for a reasonable deal for the figure online as my local shop wanted $85 for it which I felt was too high. I ended up ordering the figure from Hot Topic of all places during one of their recent Hot Cash events so instead of the $90 price tag I was able to get her $45 which was about $10 cheaper than Amazon at the time (as of this writing the price on Amazon is $46.03) and I was even able to use free site to store shipping. 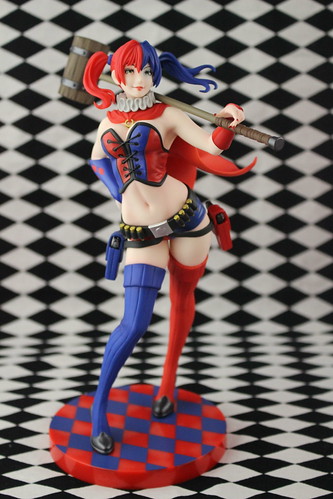 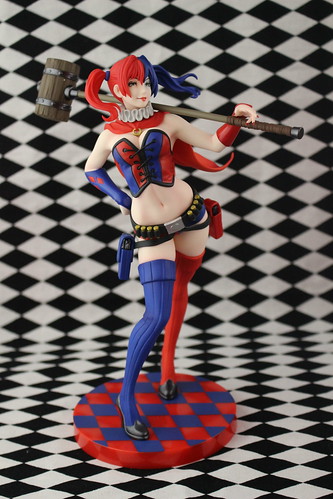 This figure is a part of the DC Comics Bishoujo line which debuted way back in 2011. DC Comics is just one of the more western licences that Kotobukiya has partnered with to release figures based on illustrations of Shunya Yamashita of their respective characters/properties, they’ve also partnered with Marvel comics, various video game and/or horror film franchises even if  the particular license is not known for sexy female characters ie. the upcoming sexy version of Chucky from Child’s Play which you can see here (no I was not kidding!). 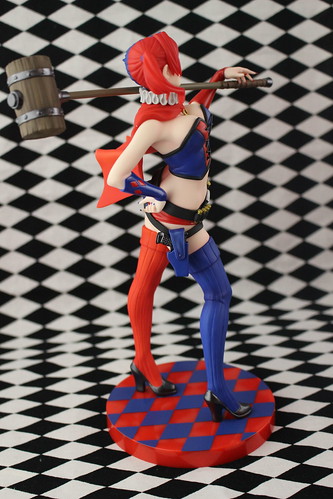 The figure is 1/7 scale so it is approximately 10 inches tall. Her MSRP is 7800 yen (Kotobukiya is a Japanese figure company so pricing is in Japanese yen) most brick and mortar comic book stores seem to be selling her in the $75-$80 range at least around the New England area but she can generally be found online for a little cheaper with a little hunting. 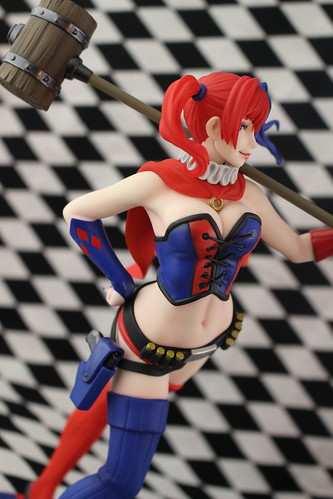 In addition to being incredibly detailed I must that one of my favorite things about this figure is that I love how bright and vibrant the colors are. The red and blue of Harley Quinn’s new 52 outfit just really pops, it’s a shame that this outfit didn’t really last that long in terms of comic continuity. 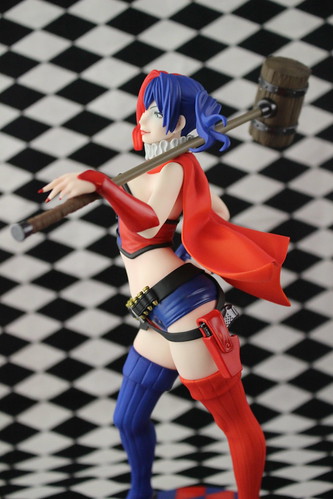 In addition to her signature mallet, she comes with a pistol on either hip. Harley Quinn’s mallet and guns in general tend to be her most frequently used weapons so it’s kind of nice to see her both versus either/or. I love the sculpt of her flowing half-cape. 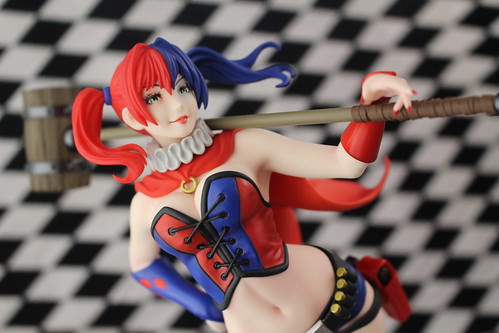 I love that Kotobukiya put in that little bit of extra effort to actually give her painted nails to match her outfit, it’s a nice little detail. 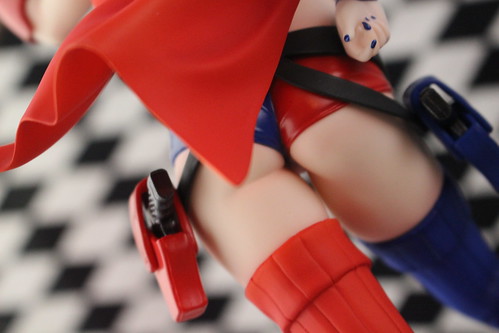 The back view of the figure on the one hand I kind of hesitate to showcase this particular angle of the figure but on the other it is really nicely sculpted for something that is more likely not going to be seen when on display on the shelf. 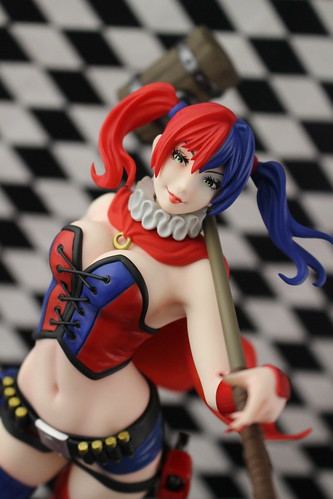 I’m not always the biggest fan of Shunya Yamashita’s illustration style, the bodies always look phenomenal they are the idealized feminine form which translates beautifully into figure form but sometimes the faces don’t translate well from illustration to figure form. With this line a lot of times it comes down to me seeing the figure in person before I am able to make a call on whether or not I want to buy the figure, regardless of how much I love the character sometimes the face can just completely kill it for me. I was all set to buy the Power Girl figure from this line a while back until I took a better glance at her face as I was walking to the register to pay for her and I had to put her back, the body sculpt was amazing but I couldn’t get past that face. I know it’s all just a matter of personal taste but if I am spending money on it I have to be happy with it. 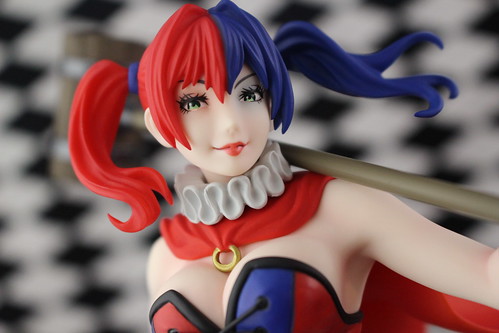 After being a bit disappointed with how some of the face sculpts turned out, I really wanted to see Harley Quinn’s face sculpt in person before purchasing her so I was glad to be able to see her locally before ordering online. I have to say that I actually quite like the face sculpt on her. 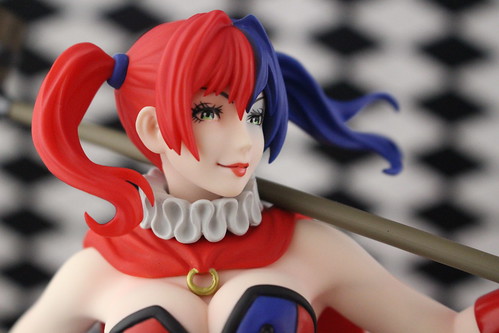 The painting on her face is really nicely done though is it just me or do her eyes look a bit more green than blue? 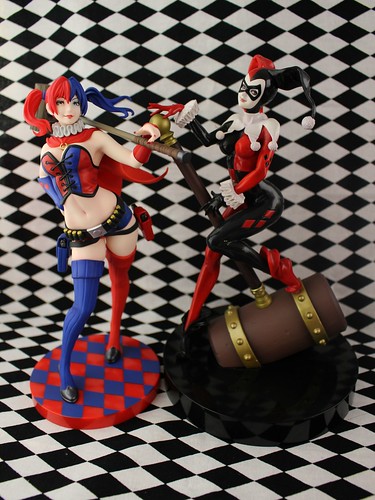 I also have the original “classic” version of Harley Quinn that was released as a part of the DC x Bishoujo line way back in 2012, I wanted to take a side by side picture of the two. I’m really torn while I normally prefer Harley Quinn’s iconic outfit that debuted on Batman the Animated series but I have to say I much prefer the pose and overall style of the New 52 version of the figure. 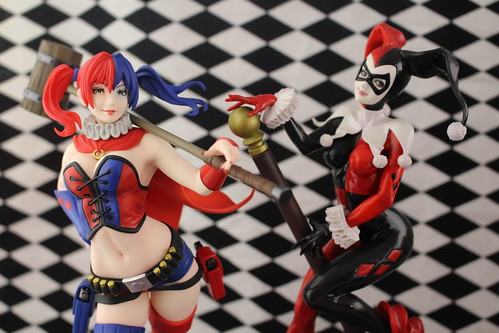 No matter which version of Harley Quinn you prefer, I have to say that I’m very happy with both figures they are really nice quality and great representations of the one and only Harley Quinn!