Earlier this year, I fell down a rabbit hole… I ordered a Marvel Collector Corps box because I had seen an advertisement for the Deadpool box and had to have it, I hadn’t really intended to continue my subscription but as each theme got announced it was like “oh hey, that’s cool!” and I ended up continuing to subscribe. I even went back and ordered all of the previous boxes except for the Guardians of Galaxy box (eh) and the Villains box which they had sold out of (I really only wanted the Loki Dorbz which I eBay’ed). While I really love the Marvel films, most of the actual comics I read and have read for years are DC so even while the first few themes weren’t particularly appealing I was very interested in the DC Legion of Collectors box.  My first DC box was the Suicide Squad box which I previously wrote about here which was followed up by the Women of DC box which I neglected to write up. Last week, I finally received the November Legion of Collectors box the theme was “Batman Villains”. I love villains especially Batman’s villains somehow the villains always seem a lot more compelling to me than the good guys so as soon as I saw the theme announced I just knew I would have to get this box! 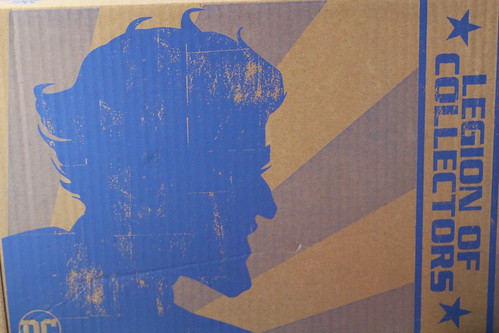 So what’s in the box? 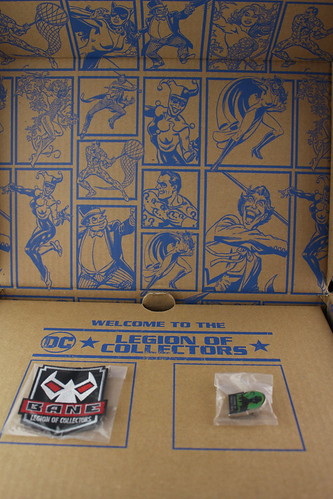 Opening the box the first thing I’m greeted by are this box’s pin and patch, no matter which Funko box you subscribe to Smuggler’s Bounty, Legion of Collectors or Collector Corps you receive a pin and a patch. I like the print on the inside of the box. 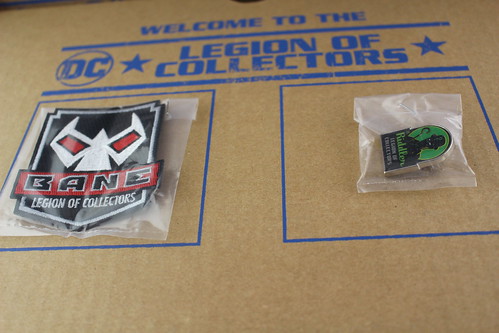 I unfortunately don’t really have much use for these but they are kind of cool. The patch is Bane themed which only seems to serve to remind me that we have yet to actually get a Bane pop, I’m kind of hoping that maybe as a part of the Batman the Animated Series line. The pin is Riddler themed, I kind of like how mysterious it looks with us only being able to see his outline. 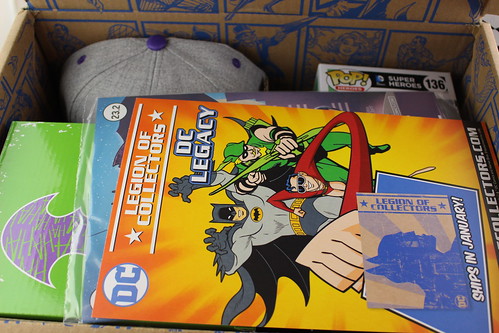 Opening the box up a little bit further. They included an advertisement for the next box which is DC Legacy themed I’m currently leaning on waiting for spoilers for it before committing to order or not as there are a lot of DC Comics characters such as Plastic Man that I’m just not that interested in plus shelf space as always is a concern so I am trying to stick to the themes that appeal to me most. 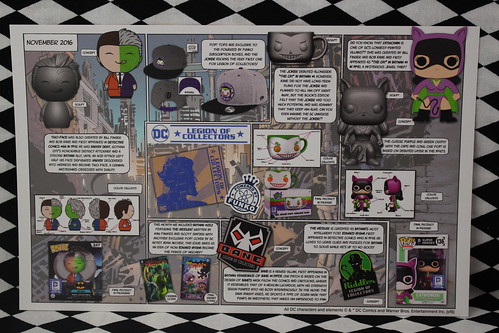 This is what is on the back of the advertisement it explains the contents of the box. 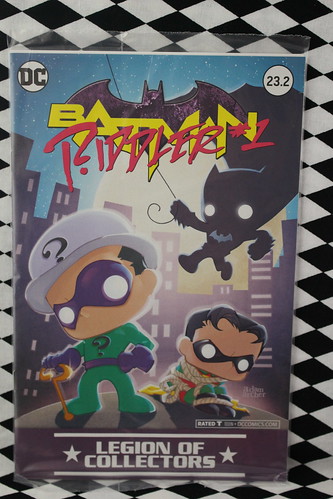 I love the artwork on the comic, the comic itself Batman #232 features the Riddler and was pretty decent. 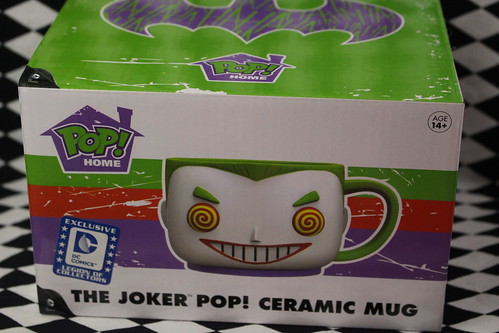 The Joker Pop mug in the box. I never really meant to collect the mugs but it is somewhat fitting that the mug was Joker and my first Funko Pop was actually the Joker as well. If I was going to end up with a Pop mug, I’m glad it was the Joker. 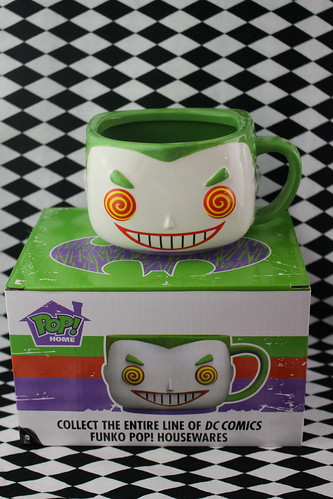 The mug seems to be nice quality though the size is kind of unwieldy, I think I’ll stick to using one of my Alice in Wonderland mugs on the rare occasion I actually drink something that requires a mug. 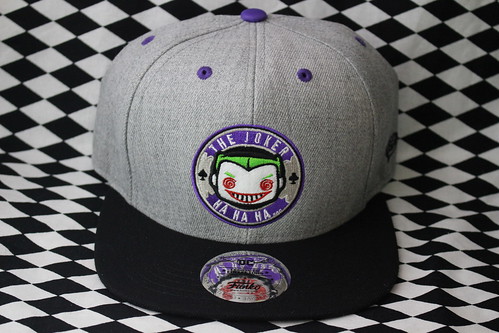 Pop Top Joker hat, again if I am going to be stuck with something I might not use otherwise I’m glad it is at least one of my favorite characters so there is a better chance of my actually using it eventually. 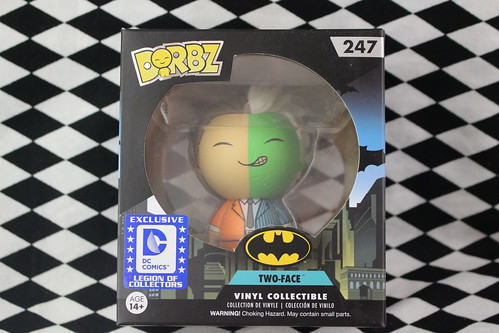 Two-Face Dorbz in the box. I was disappointed that Two-Face wasn’t included in the Batman Dorbz line with all of the other classic characters like Penguin and Riddler so I was very excited about him being included in the box. I’m hoping to acquire the animated version of Two-Face as well from the Walmart Black Friday box. 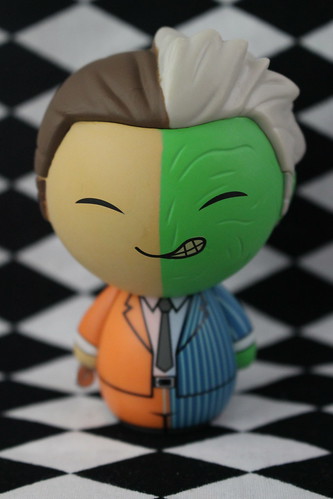 I’m very happy with the Dorbz and I especially love the detailing on the damaged side of Harvey. I love that they went with a really classical comics styling of Two-Face. 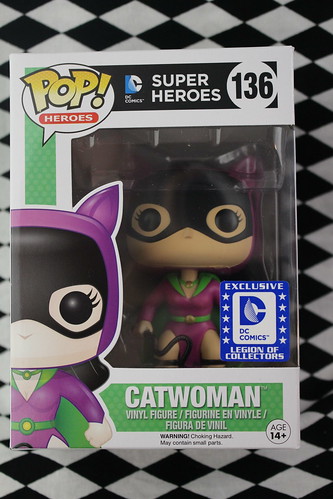 Exclusive Catwoman in the box. 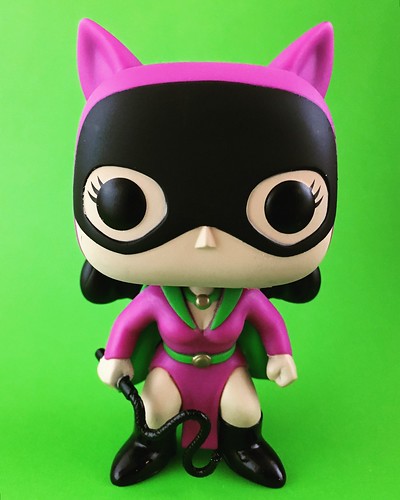 Up until this point I hadn’t really been 100% happy with either of two Catwoman Pops that had already released the one based off of the 1960s TV Series (love the campy Batman tv series but the glitter kind of killed things for me) and the one based off of Anne Hathaway’s appearance in Dark Knight Rises (I feel the Pop looks a bit mannish). I had been hoping that a Pop based off of Catwoman’s appearance in the Arkham series of games would be released, it seems kind of strange that there wasn’t especially since she was a playable character in Arkham City. 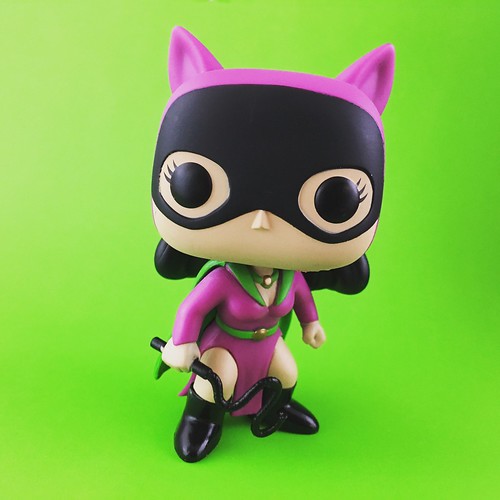 I was overjoyed when I opened the box and found a Catwoman Pop based off of her very first comic appearance way back in 1940 when she was known simply as “The Cat”. The Pop really captures the essence of her character and has a great interpretation of her sexy yet impractical early costume. I love that she comes with her trademark whip. 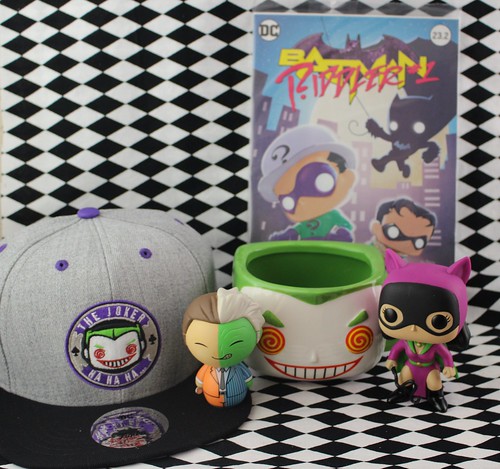 Overall, I’m pretty happy with this box though if the mug and hat had featured any character but the Joker I probably wouldn’t have looked upon the box quite so fondly. I feel like the value was there for the money. I’ll continue to keep an eye out for Legion of Collector’s boxes with themes that peak my interest so I can hopefully order more boxes in the future.